Why Should We Sift Flour?

Updated: April 30, 2021 0
This article may contain affiliate links. When you purchase through links on our site, we may earn an affiliate commission. 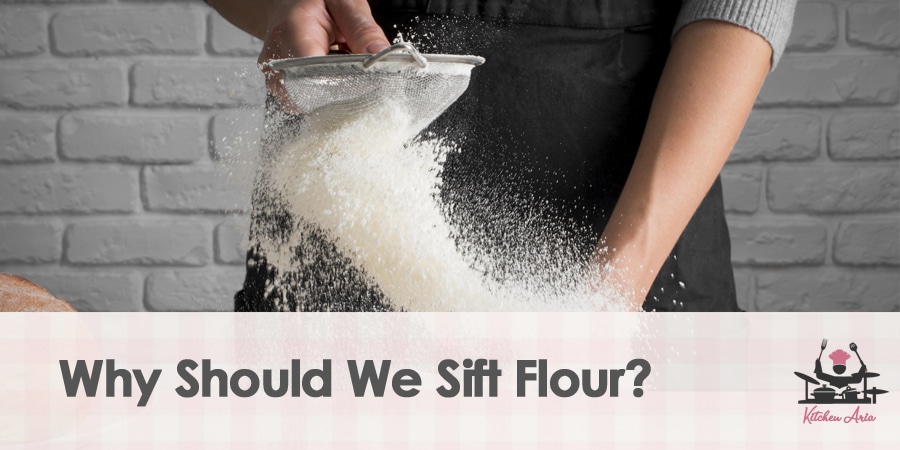 One of the basic ingredients that we use in the kitchen is flour. It is commonly used in baking but can also be used in other recipes apart from baking. You may have come across or heard the term sifting flour for those who have experience in using flour. But what is sifting flour? And do you have to sift flour? Here is everything you need to know about sifting flour.

What is Sifting Flour?

In cooking, sifting is the process in which you break up the tiny lumps in the flour, and it introduces air to it at the same time. This process also ensures that other substances such as odd stuff or small bugs are removed from the flour. Sifting is not exclusive to flour only.

You can also sift cocoa powders or other powders that lump together. You use a sifter to sift flour. You just run the flour over the sifter to separate the clumps and introduce air to it.

However, you don’t need an expensive sifter since there are quality and affordable sifters out there. Some bakers even sift flour without using a sifter. You can sift your flour by using a fine strainer.

To do so, simply put your strainer over a mixing bowl and then put flour on the strainer while gently shaking the strainer. Do not put the flour in all at once unless you only use a small amount of flour. It is generally a good idea to sift more than once so that air is supplied generously throughout the flour.

Why do you Have to Sift Flour?

Why do we sift flour? The answer is simple. There are actually many reasons you should sift flour: First, you have to be familiar with the flour you are using. If it is something that is shipped over or stacked somewhere for a significant amount of time, then there is a high possibility that it has small clumps of flour in it and that it lacks air.

This is one of the few cases in which it is needed to sift flour or aerate it. The most effective way to aerate your flour is to sift it with a sifter or with a strainer. However, in the absence of both, then you can use a whisk or a fork to sift your flour.

You should use a gentle motion when sifting. Take note that it is best to measure sifted flour than unsifted flour as it is much more accurate. Certain recipes do not require you to sift the flour. If you are using commercial flour, you don’t need to sift it.

This is because commercial flours are mostly refined enough that there are no bugs, chaffs, and other unwanted extras mixed in them. If you are trying to make pie doughs, muffins, cookies, and other everyday, common baked goods, it is generally okay not to sift your flour.

In aerating the flour in such recipes, you can use a spoon or a fork and mix the flour up a bit, and it will do the job. If you are one of those very particular with the texture of baked goods, then sifting flour is a must.

When mixing dry ingredients, sifted flour mixes way better than flours that aren’t sifted. You can mix sugar, cocoa powder, spices, and other dry ingredients easier and more effectively with sifted flour. The result is a more balanced texture.

However, there are some recipes in which sifting is an essential step. If you are trying to make a sponge cake or other soft cakes, then you have to sift your flour. These baked goods’ delicate properties mean that the more air in your flour, the better, and sifting is the best way to aerate the flour.

When trying to add a thin layer of flour, such as when making dough, it is better to sift it than just toss it immediately. There are so many things that could go wrong with just tossing it. There may be lumps of flour or too much flour, and it would cause your dough to go dry or be tougher than you want it to be.

When sifting flour to add a thin layer, you ensure that the flour is balanced, thin and that there are no lumps. It is also easier to control, and you can make sure that you do not add too much flour.

Other Advantages of Sifting Flour

Sifted flour is significantly lighter compared to unsifted flour due to the air that is introduced during sifting. This means that it is easier to mix sifted flour with other ingredients.

As most bakers know, measurement is an essential aspect of cooking. When flour is sifted, the measurements are much more accurate since there are no weird substances and lumps of flour. This is more pronounced when baking in huge quantities since the difference in measurement is amplified.

If you have stocked flour that has not been used in quite some time, there is a tendency that some parts of it get lumped together. It is highly recommended that you sift the flour in these cases to get the proper measurement.

How to Sift Flour Based on a Recipe?

Many bakers are easily confused with this, especially most beginners. When the recipe says to add 3 cups of sifted flour, you should sift slightly more than three cups. After sifting, measure the required number, and then that is what you should use.

Take note that you should measure after sifting and not before. The most common mistake beginners make when the recipe says to add 3 cups of sifted flour, they sift exactly 3 cups and then add it immediately. Take note that the measurement for sifted and unsifted flour is different, which is why you should measure after sifting.

Sifting flour is an easy and essential process every baker or anyone who wants to bake should know and learn. It may come in handy in your baking endeavors one day. We hope that this article has provided you with the essential knowledge regarding the process of sifting and why you should sift flour.

First of all, we are just a team of people who enjoy tasty food. Some of us work as chefs, others practice cooking skills only in the home kitchen. We are passionate about the food and our goal is to help you choose only the best tools for your kitchen so you can surprise your loved ones (and yourself) with delicious dishes.

The Best Bench Scrapers in 2021

The Best Mandoline Slicers in 2021