What is a Utility Knife Used For?

Updated: August 12, 2021 0
This article may contain affiliate links. When you purchase through links on our site, we may earn an affiliate commission. 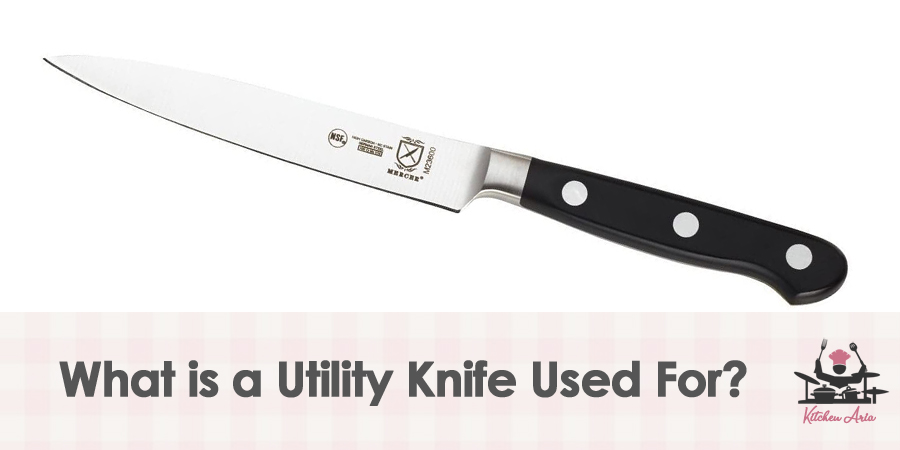 There are all kinds of knife available out there. Traditionally, there are about 7 or 8 types of knives that come in a set. One of them is usually a utility knife. But what is a utility knife used for? We know what the uses are for most of the other knives in the set but the utility knife is really not described in its name or used for any specific cutting application. So why is there a utility knife and do you need to have the best one that money can buy?

In this article we will talk about what a utility knife is and why you may want to have one laying around. We will also talk about some of the ways you can use your utility knife.

What is a utility knife and do I really need one?

Originally, a utility knife was used as a hunting, gathering and fishing knife. It was used to cut ropes, skin animals of their hides, remove fish scales, filet fish and field dress larger animals. After a while, the utility knife made its way into the kitchen and is basically thought of as a universal knife for many jobs. The knife is shorter than a chef knife but longer than a paring knife. The edge of the blade is very sharp and can be a straight edged knife or a serrated knife as well.

Even though the paring knife is still constructed of the same knife materials of most of the other knives in the set it really is a mystery as what it should be used for. In all reality it looks like a carving knife or a slightly bigger steak knife. While it can be used for those tasks, there are plenty of other tasks to use the utility knife for. It really is a catch all knife and can do the jobs of all the knives in the set. Which is a shame that most people rarely ever use the knife as it is. If the utility knife doesn’t come with your knife set, chances are you will not be running out to buy a single utility knife to hang on the best magnetic knife holder in your kitchen with the rest of the knives. But once you realize what the utility knife can be used for, you may change your mind.

Utility Knife Uses in the Kitchen

Usually, you use a chef knife for cutting up fruit and vegetables of any size. But sometimes, the chef knife is just too big to maneuver around some foods. A smaller knife like the utility knife will be able to make precision cuts on most medium to small sized vegetables when the chef knife is not present. It also works great for removing corn from the cob. The serrated edged knife works the best for these types of jobs. But if you find yourself cutting round or dense root vegetable like beets, carrots or radishes, the straight edge blade will be safer and work more efficiently. The serrated blade should be used for softer vegetables like tomatoes and citrus.

There really is not a knife for cutting up small meats like salami, pepperoni and sausage or for soft and hard cheese for platters or charcutier plates. That is where the utility knife will come in handy to cut through these dense foods. A paring knife usually just will not cut the food properly and a chef knife is just too big. The utility knife should be the go-to knife for these types of knife cuts.

4. Used as a second carving knife

5. Used as a steak knife

In a knife set there are usually on six steak knives. But what if you have a dinner party where you are serving steak or grilled chicken and there are seven people coming to dinner? Well, this is a perfect opportunity to use the utility knife as a second steak knife. Chances are, the guest will not even notice he is holding a utility knife because they look so similar. Honestly, the utility knife will actually be a better at doing the job of a steak knife than the actual steak knife will do.

6. Used as a second bread knife

7. The jack of all trades

The utility knife is really a very universal kind of knife in the sense that it can really do the job of all the knives in the knife set to a certain extent. One of the only knives in the knife set that it really can’t replace is the boning or filet knife. It just is not thin or flexible enough to get between the skin and meat of fish. You could always try if you wanted, but the utility knife will be able to handle all other jobs much more efficiently.

Conclusion
So, as you can see the utility knife can do a whole lot more than you would have expected. It really is a coveted type of knife and that is why it is usually included in a knife set. They wouldn’t just put a knife in the butcher block with the other knives if it had no purpose. But the utility knife is used to replace all the other knives when they can’t be found or they are dirty. Sometimes the utility knife will be able to a better job at some tasks than the actual knife used for that cutting application will be able to do. So next time you need to cut bread, small fruits, meats and cheese, spring for the utility knife. It’s time to stop ignoring one of the best knives in the set.

Kevin began his cooking career in 1995 when he started out as a line cook for The Garden Café. In 2005 he worked as the sous chef at Chester's Chophouse in Wichita Kansas under the well-known Executive Chef, Bobby Lane. In 2010 he made his mark on the city by branching off to become the executive Chef and General Manager of the Crown Uptown Theatre. When the business sold he returned to Chester's Chophouse as a sous chef. Now he hung up his chef coat to become a stay at home father and writer.

The Best Paring Knives in 2021

The Best Carving Knives in 2021

The Best Fillet Knives in 2021

What is so Special About Japanese Knives: Are They Better?