8 Types of Cooking Salt Worth Knowing

Updated: April 7, 2021 0
This article may contain affiliate links. When you purchase through links on our site, we may earn an affiliate commission. 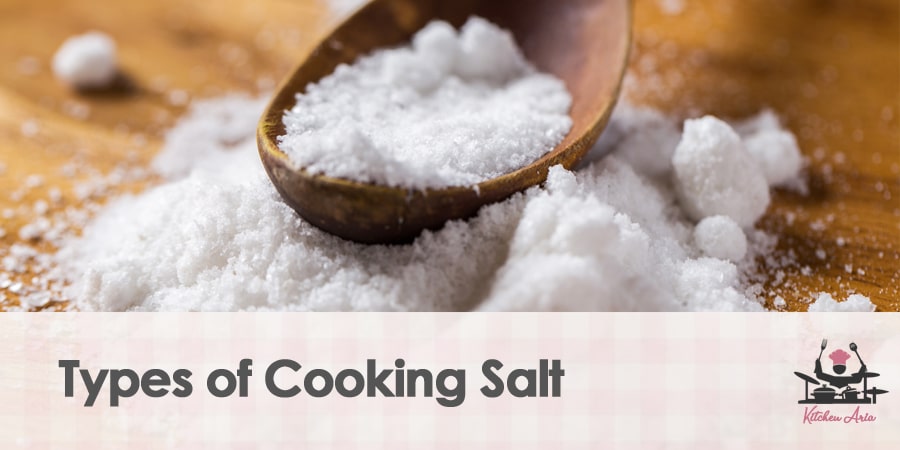 Salt is an essential ingredient used in cooking various recipes to enhance taste and add nutrients to the food. However, not many people know if the salt they use in cooking is the specific type of salt that they should use.

If you visit a grocery store, you will notice different salts on the shelves. So, how do you know which type suits your food? This article will help you identify different types of salts used in cooking.

It is also known as table salt and has a weaker salinity and flavor than other types. It has square-shaped crystals and appears to be fine and smooth.

The slight chemical taste after consumption and the high dissolving rate make the salt common in cooking and baking various foods. This type of salt also contains iodine to help fight iodine-related issues in the body.

This salt appears to be larger in shape, coarser, and flakier than table salt, probably due to the evaporation’s raking process.

Its name does not signify that it is kosher, but because it is widely used in koshering meat. The process involves rinsing, soaking, and salting to remove blood from the meat.

Most professionals prefer kosher salt because it does not have high salinity levels. Therefore, it is possible to avoid over-salting. Due to its large particles, they can easily pick it and spread it evenly with fingers.

Sea salt is derived from the sea through a process of evaporation. This makes it unrefined, coarse, and irregularly shaped with different colors. It might contain traces of copper, magnesium, and calcium because it has not undergone processing.

Because of the many elements in the sea salt, its taste, although good, cannot be reliable since it will vary depending on where it was sourced. It is tastier in garnished foods rather than seasoned dishes.

On the other hand, most sea salts are expensive, making it uncommon for ordinary culinary.

This salt derives its color from trace minerals that include calcium, magnesium, and potassium. These minerals give the salt a great unique taste. Pink Himalayan salt is harvested from the Himalayan Mountains of Pakistan, thus the name.

The pink salt has large irregularly shaped particles. It can tolerate high temperatures because it undergoes a special drying process of about 1,200 degrees Fahrenheit. It is recommended to create electrolyte balance and raise hydration levels in the body.

The Pink Himalayan salt can be in fine or coarse crystals which allow it to be used in various culinary activities. Thus, cooks can use it for seasoning soups, meats, or vegetables.

Flaky salt is the most beautiful salt because of its large square-shaped particles. It is harvested from the sea using hands and has minimal mineral content. Although it is clean, it has an intense salt flavor that could result in oversalting.

Flaky salt is best used as a finishing salt to enhance the food’s flavor and add texture. It can also be used to bake and also garnish sweets. Because of its higher price when compared to other salts, most people do not use it in general cooking but for finishing to showcase cooking expertise.

It is harvested in France and is also known as sel gris in French. The salt contains raw crystals with traces of potassium, calcium, and magnesium, thus the grey color and the briny mineral taste.

Its alkalinity also helps in assimilating sodium into the body. It is mostly used in pickling and seasoning meat and fish.

Fleur de sel is also harvested from France’s tidal pools in the country’s northeast. The salt undergoes a short crystallization process after harvesting it from the water’s surfaces. Therefore, it has a high capacity to retain moisture.

It has a crunchy texture and a slight briny taste. It is mostly used in finishing foods such as meat, vegetables, seafood, and salads.

These are volcanic salts with historical myths in the Pacific islands. The red salt has volcanic clay which has mineral traces and electrolytes. These are what give it its color. The black color in the black salt results from the activated charcoal in it.

Both are used in seasoning salads and barbecuing meat, poultry, and fish. They give food a complex taste and briny flavor.

Final Thoughts
While choosing the type of salt, flavor and texture are essential elements you have to consider. You must know which salt will bring out the best taste to your food for you to enjoy the meal. Note that if salts are not used properly, they can result in undersalting or oversalting which will interfere with the taste of your meal.

First of all, we are just a team of people who enjoy tasty food. Some of us work as chefs, others practice cooking skills only in the home kitchen. We are passionate about the food and our goal is to help you choose only the best tools for your kitchen so you can surprise your loved ones (and yourself) with delicious dishes.

The Best Fillet Knives in 2021

The Best Meat Grinders to Use at Your Kitchen in 2021

The Best Recipe Websites in 2021