What is so Special About Japanese Knives: Are They Better?

Updated: August 12, 2021 0
This article may contain affiliate links. When you purchase through links on our site, we may earn an affiliate commission. 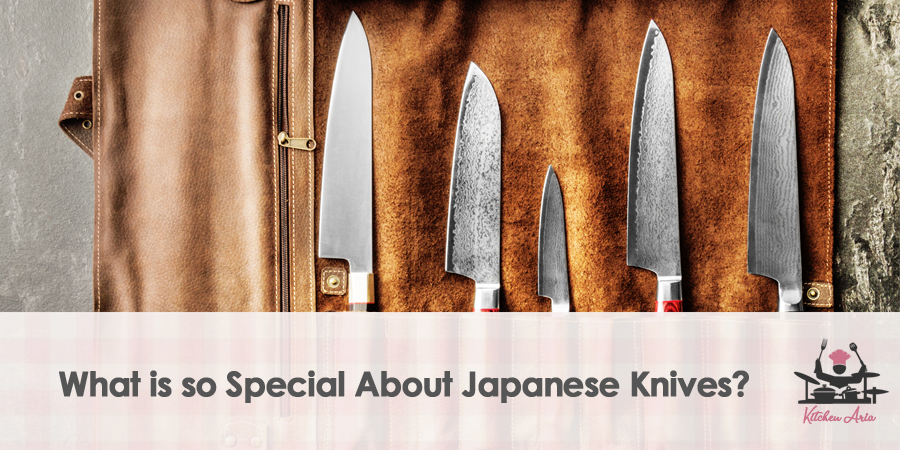 Japan has been making knives and swords for centuries. With so much improvement through the generations of knife makers, it’s no wonder why Japanese knives are so highly sought out after by chefs and cooks alike. However, Japan is not the only country that has perfected the creation of knives over the years. So, the question still remains: What is so special about Japanese Knives? Are they better than other types of knives?

Well, the answer is not as simple as you would think and it really depends on the preference of the consumer or the chef. In this article, we will go over what makes a Japanese knife so special from the materials used to construct them to the overall design of the knives. We will also go over some of the different tasks Japanese knives are used for and what their functionality may be when compared to other knives.

Knife materials have come a long way since the invention of steel. Before steel, stone and iron were the main elements used to construct blades. But since steel was first used to construct blades, there have been many advancements to steel to make it harder, stronger and sharper. Not all steel is created equal from country to country. While they may share some similarities, the general makeup of the alloy varies on a wide spectrum.

All styles of steel have the addition of carbon in some form or another. But some steels have a higher amount of carbon than others which makes the metal harder. High carbon blades are going to score higher on the Rockwell scale of hardness which makes them able to have a thinner blade, a sharper edge and lighter weight. However, it also makes them more prone to breaking or chipping if not handled properly.

Many Japanese knives are going to have a higher carbon makeup.

Low carbon blades are going to be a softer metal which makes them easier to forge and construct. It also means that the blade is thicker which makes them much stronger and less likely to break. It also means that the blade will hold an edge for longer periods of time without needing to be sharpened with a whetstone or the best sharpening stone. Most German knives are constructed of low carbon steel.

This type of steel is still a high carbon steel but also has the addition of other alloys such as vanadium, manganese and cobalt. This means the blade has the best of both worlds of low carbon and high carbon steel benefits. This metal is very expensive and is one of the best materials used in Japanese knife construction. German knives also have a similar type of metal which is referred to as AUS-10. Both metals are referred to as the “gold standard” of stainless steel.

This type of steel is the king of all steel in Japan and for a time was only sourced in Damascus. Now it refers to the process of creating the blade. Two types of metals are used to forge the blade and need to be done so by hand only. The metals are folded a series of times over and over the strengthen the blade. The result of the finished product resembles beautiful wavy patterns on the blade from the pressing process. It also gives the blade strength, hardness, edge retention and rust prevention. This type of steel is very expensive.

Japanese knives have a very different design to them when compared to basically all other knives around the world. They have been constructed that way to complement their qualities that set them apart from other knives.

Most German knives have a full tang that follows down through the handle to give the knife strength and long-lasting ability. Japanese knives do not have a full tang. Since the metals they use are lighter, a smaller tang gives the knife excellent balance and control to the user handling the knife.

Most knives have a bolster. German knives generally have a full bolster which protects the fingers when using the knife. Japanese knives do not have bolsters to allow the knife to be sharpened easier on a whetstone or when using a honing rod to fine tune the edge of the blade.

Since the metal used to create Japanese knives is harder, this allows the blade to be thinner. This helps to create a sharper edge whether it is single or a double beveled edge. The overall design of the blade also looks different for specific cutting techniques. German blades will have a curved edge to help with the rocking of the blade when cutting vegetables. Japanese knives have a straight edge to help when slicing. The most common knife is usually the chef knife which has a point at the end of the blade. The Japanese equivalent of the chef knife is called a santoku knife which has a rounded tip at the end of the blade.

The Edge of the Blade

Japanese knives are mainly used for precision cutting like slicing and exact cuts while German knives are more used as the workhorse of the kitchen for chopping through dense vegetables and sometimes cutting through bone. Neither knife is interchangeable which is what makes the knives so different but still useful in their own way. The type of metal used usually determines the use of the blade. With that, the edge of the blade also changes dramatically.

Angle of the Edge

While the edge of a Japanese blade may be sharper, it will tend to lose its sharp edge more often than a German blade. This means Japanese knives will need to be sharpened by hand more often in order to keep the edge of the blade sharp. The softer the metal of the blade is, the longer it will be able to hold an edge without routine maintenance and a rigorous sharpening schedule.

Conclusion
All in all, a Japanese knife is highly coveted by chefs because of the ability to make precision cuts with the blade. In order for the blade to do this, the knife needs to be crafted and sharpened by hand and needs to be constructed with high quality materials that are often difficult to source and work with. This makes Japanese knives very expensive. When it really comes down to it, it is all about the preference of the user, the amount of money they are willing to spend on a quality knife and what the knife will be used for. Japanese knives are some of the best knives in the world and are really great at specific cutting techniques, the best in fact. Which could constitute them as the best knives above all the rest to some people.

Kevin began his cooking career in 1995 when he started out as a line cook for The Garden Café. In 2005 he worked as the sous chef at Chester's Chophouse in Wichita Kansas under the well-known Executive Chef, Bobby Lane. In 2010 he made his mark on the city by branching off to become the executive Chef and General Manager of the Crown Uptown Theatre. When the business sold he returned to Chester's Chophouse as a sous chef. Now he hung up his chef coat to become a stay at home father and writer.

The Best Carving Knives in 2021

How to Use a Knife Sharpener

The Best Sharpening Stones in 2021

What is a Utility Knife Used For?

How to Pick a Kitchen Knife: A Definitive Guide

The Best Paring Knives in 2021